I saw it again today… another 2012 Influencer List. I couldn't get through the entire list, though, because I was too busy raking my nails down my face and pulling my hair out. It wasn't an influencer list at all, it was just another popularity list. To be certain that we all understand the difference, let's go ahead and define the two: 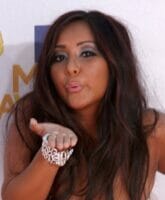 Still don't get it? One of 2012's most popular mom's is arguably Nicole “Snooki” Polizzi. On Twitter, Snooki has 6.1 million followers. Snooki has a Klout score of 88. Snooki's topics include photography, pizza, baking, the military, and shoes. Snooki's name is also synonymous with motherhood this year on many lists.

Epäilemättä Snooki on suosittu. But whether or not she's vaikutusvaltainen on these topics is arguable. People may look to Snooki for the latest in shoe styles since she's a pop icon… but it's doubtful she's going to help to influence your opinion on your next camera purchase, pizza purchase, armed force question, baking recipe or parenting question. I'm not knocking Snooki… just pointing out that Snooki is absolutely popular, but has questionable influence.

Ongelma on nämä vaikutus scores and lists are not really influential at all. Listing Snooki as an influencer just isn't accurate. If I want an opinion on photography, I'm going to seek out Paul D'Andrea. Pizza? I'm going to my friend James who owns Brozinni's. Leivonta? Äitini.

You get the point. But do you notice something about my influencers? They're not famous and don't have millions of followers or fans. They're trusted because I have built a personal relationship with each of them over time and they earned my trust. I'm not discounting that popular people can be influential… plenty are. However, I am discounting that to be influential, one must be popular. That's not the case.

As a personal example, I know that I've become vaikutusvaltainen in the marketing technology space. I've consulted on over $500 million worth of acquisitions and investments in the last few years and provided some great direction for many companies. That said, I'm not popular in the space. You won't find me in the top 10 of too many lists and I'm not headlining events in social media and marketing. I believe, if the lists were written based on industry leadership and trust, I'd find myself ranked much higher. That's not a complaint… just an observation.

We do need to find a way to better distinguish between influence and popularity, though. Marketers need to identify influencers and invest with influencers to help share their products and services. However, marketers must also avoid wasting money on those that are simply popular and don't influence anything.